Personal essays from a longtime mallwalker at a regional subrban mall.

Mallwalking is a book of extraordinary personal essays about ordinary people which reveals a partial glimpse of the American ethos as the nation transitioned from the 20th to the 21st century. Mall-sourced vignettes about religion, education, health, marriage, friendship, history, gender roles, and romance blend humor and pathos to portray a nation in social, political, and economic upheaval.

For twenty-five years the author exercised daily by walking in a suburban regional mall where he collected the stories of hundreds of acquaintances. He chose a fascinating few for this engaging American snapshot from the mall.

Learn how America grew its suburbs and drained cities of workers because of the simultaneous implementation and promotion of Federal government programs following World War II. The inexcusable absence of effective strategic planning created a vacuum soon filled by the drug trade and resultant crime then drove businesses from urban cores. The new suburbs added exclusionary zoning which made the mall movement inevitable.

Smile at the heartwarming story of high school friends whose lives diverge until they bond again as septuagenarians ordered by their shared heart surgeon to walk the mall following coronary bypass surgery.

Marvel at the daily mall visitor who crafts ingenious coping rituals to enjoy life despite having no family and enduring dialysis three times weekly for thirty years.

Admire the courage of the workaholic couple whose marriage is dissolving until they decide to abandon their successful careers and start a mall franchise business together.

Reflect on the sobering tale of the English teacher who works 39 years in a violent urban core senior high school and devises a sad mall alternative for his 40th pension-qualifying year.

Enjoy the tale of a surgeon’s mallwalking wife whose zealous religious beliefs lead her to defy the medical establishment and her family of non-believers by insisting that her rosary can produce more miracles than science.

Empathize with middle-aged Sarah as she battles depression and anorexia with determined rituals that force her to endure teenage taunts and impolite stares at her skeletal body as she walks the mall twice daily.

Applaud the success of Sydney the mall security guard who wants a wife and family as he approaches age forty and enters a radio station’s matchmaking contest to achieve that goal.

The romantic tale of another mall regular, a World War II torpedo bomber pilot, will touch your heart as he marries, leaves for war, and struggles to return alive.

After living in the same segregated city for over fifty years, mallwalking brings a couple together resulting in his first Jewish friend and her first Christian friend. This thought-provoking vignette illuminates the damage caused by artificial boundaries imposed across the world by organized religions and nation-states.

Collectively these and additional stories in the book offer a snapshot of America’s ethos as the 20th century wound down and the 21st century dawned.  It’s the snapshot of a generous nation and a courageous populace, but one with flaws that need solutions to avoid following other capitalistic democratic republics into the tragic dissolution John Adams feared. 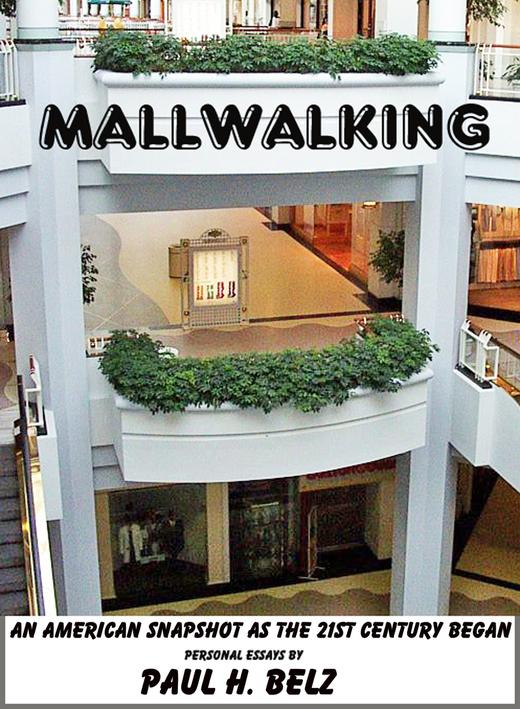 BUY THE BOOK ON AMAZON.COM

The Monster Lincoln: The Lies My Schools Taught Me

​​​Birth of the Suburbs and the Malls
The lack of strategic planning during the simultaneous implementation of well‑meaning Federal government programs after World War II led to the draining of workers from the urban cores. The concentration of poor left in the cities created a vacuum filled by the drug culture, which was enabled by the permissiveness of the 1960s.

The Friendship
The value of friendship is revealed in this heartwarming story of two high school friends whose lives diverged until as septuagenarians they bonded again while mallwalking as part of their medical rehab for coronary bypass surgery.

Sarah
A middle‑aged woman battles for meaning and for life itself against the dark, suffocating forces of depression and anorexia. Read about her remarkable coping rituals.

Maria's Rosary
The rosary never left the hand of this Johns Hopkins surgeon's wife. She believed it had more power to create miracles than modern medicine. Water she brought back from Lourdes made a believer of the paralyzed son who had long joined her husband and daughters in ridiculing her zeal.

A Schoolteacher Surrenders
He taught English for 40 years in one of America's urban cores. He tells a compelling story blaming government for destroying the public school system and he reveals a sad coping strategy for ending his career in a violent, apathetic environment.

Cornucopia of Humanity
A large suburban regional mall is the best laboratory in America at the dawn of the 21st century for observing the full spectrum of humanity on parade.

Many Happy Returns: Coping with Dialysis
Steve Rash developed many coping mechanisms in his thirty‑year battle with end‑stage renal disease. Two transplant rejections led the unmarried man on a courageous search for a fulfilling life while enduring three decades of dialysis.

The Lure of a Train Wreck
When asked about her vacillating relationship with Grace, Rachel likened it to a train wreck. "It's too fascinating not to be drawn to it, but then you're repulsed by what you find."

Dairy Queen
Two workaholics with successful careers were drifting apart. To save their marriage they quit their jobs, opened a Dairy Queen franchise and worked together at their mall store.

Torpecker
The story of romance and war for a World War II torpedo‑bomber pilot.

The First Jew
After living in the same city for over 50 years, he became her first Christian friend and she became his first Jewish friend.

The Healer
The story of a urologist with a passion for mallwalking. The unmarried surgeon searched a lifetime for elusive fulfillment and relationship skills until cancer brought him his epiphany.

The Flirtation: The Eye is Love's Tongue
For two years the mallwalkers enjoyed a complex romance without physical or verbal contact; not even a hello or a goodbye. The remarkable relationship was built entirely on eye contact!

Smiles: The Soul Undressed
Every person has a "signature" or baseline smile that places their personality into one of ten categories. This smile is an unconscious behavior that reveals one's soul undressed.

Unlacquered Puzzle
Whether completing a jigsaw puzzle, developing a friendship or evolving a marriage, a late‑stage decision must be made about permanence.

Yearnings
The personal story of Sidney, a mall security guard. What men and women wanted as the 21st Century began in America.

A Day in the Life of the Mall
A humorous, anthropomorphic look at the annual and daily rhythms of an upscale, regional suburban shopping mall at the end of the 20th century.